An analysis of the no-load current in three-phase transformers should occur according to the type of phase connection. If the transformer is fed with sinusoidal voltage, on account of the non-linearity of the ferromagnetic core we know that in order for the induced electromotive force to be sinusoidal the magnetizing current absorbed from each phase must be not sinusoidal but deformed (i.e. consisting of a fundamental and a harmonic of the third order; higher-order harmonics are also present but as their degree of intensity is very low they can be neglected).

STAR-WOUND PRIMARY WINDING WITH NEUTRAL, AND SECONDARY IN STAR FORM 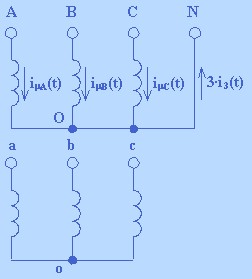 On the other hand, the third-order harmonic components at 150 Hz, being in phase (as may be observed in the figure on the right), give a result equal to i3A(t) + i3b(t) + i3C(t ) = 3 · I3(t). With a frequency of 150 Hz, this current will thus close through the neutral.
The possibility of circulation for the third-harmonic component of the magnetizing current allows the magnetizing current itself to deform and this results in the flux – and therefore the induced electromagnetic force (emf) – becoming sinusoidal (this being the required condition). The only drawback which might occur lies in a possible disturbance that the current at a frequency of 150 Hz circulating in the neutral may create in telephone lines close to the power supply that feeds the transformer.

As in this case the primary of the transformer does not have a neutral wire it is clear that the sum of the currents at point O must give a zero resultant, whether it is a question of fundamental components or components of the third harmonic.
Being out of phase by 120° with respect to each other, the fundamental components meet the condition of providing a zero resultant.
Being in phase, in order to meet the first principle of Kirchhoff at the node O the third-harmonic components must be identically zero, i.e. i3A(t) = i3b(t) = i3C(t) = 0.
It follows that the magnetizing current must be sinusoidal (as it can not have harmonic components that will deform it); consequently the flux must be deformed and, with it, the electromagnetic frequencies induced in each phase will also have to be deformed.

The deformation to which the flux is subject is shown in the figure above.
With the induced electromagnetic frequencies the star voltages in the secondary will be deformed, while the linked voltages, resulting from the vector difference between two star voltages, will be sinusoidal (the third-harmonic components of the star voltages are in fact in phase with each other and therefore cancel each other out, creating the difference).

For the primary circuit the reasoning in the previous case remains valid and, that is, the magnetizing current is sinusoidal and so the fluxes and, together with them, the induced electromagnetic frequencies will be deformed. In the secondary the induced electromagnetic frequencies are in series in the closed triangle mesh. Being out of phase by 120°, the fundamental components at 50 Hz give rise to a zero resultant, whereas the third-order harmonic components at 150 Hz, being in phase, also impose the circulation of a current at 150 Hz. On the basis of Lenz’s law, such third-harmonic current will tend to oppose the cause that generated it and will therefore tend to limit the third harmonic in the fluxes. It follows that with the triangle link of the secondary the deformation of the induced electromagnetic frequencies will decrease in a significant manner.

For the links Yy and Yd which lack the neutral in the primary wiring we have observed that the flux is deformed and specifically consists of a fundamental component and a third-harmonic component. If the transformer core is of the column type, by applying the first Kirchhoff principle to the fluxes in one of the two nodes of the magnetic circuit the sum of the fluxes must be equal to zero. It is found that only the essential components of the fluxes (out of phase by 120°) satisfy this relationship, while the third-harmonic components (in phase) can not produce a zero resultant.
This fact makes the third-harmonic fluxes close, for dry-type transformers, not through the columns but through the air. If the transformer is located in an oil chamber, the flux will be shut down through the housing of the oil container, with the latter presenting a magnetic permeability greater than that of air and, as the housing is made of metal, losses in its iron will be significant, taking into consideration that the flux has a frequency of 150 Hz.

As nothing opposes the deformation of the magnetizing currents in each phase of the primary (the third harmonic component of magnetizing current can flow freely in the mesh formed by the triangle) both the flux and the induced electromagnetic frequencies in the primary and secondary will be sinusoidal.
The line currents, given by the vector difference of two phase currents, are sinusoidal as the third-harmonic components, being in phase, cancel each other out. The satisfactory behaviour of the three-phase Dy transformer, with respect to issues of non-linearity of the core, is evident.